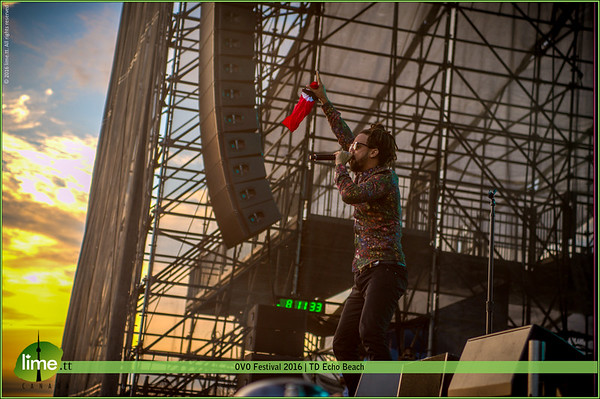 The OVO hip-hop festival has quickly become one of the most popular two-day events to take place usually during the August long weekend in Toronto, Ontario. As the specific long weekend is immediately associated as a “Carnival” weekend in the city, organizers of OVO included a day dedicated to Caribbean Soca and Dancehall entertainment this year at TD Echo Beach.

In its seventh year, the annual festival added a few changes to Day One of the event including venue, entertainment lineup, and significantly, Internationally recognized DJ, Soca, and Dancehall performances.

This year the OVO Festival went from Saturday to Monday for the first time, contrary to beginning on the Sunday and finishing up on Monday. It was evident that security was heavily enforced as patrons excitedly made their way into the venue.

The venue also changed from normally being held at Molson Amphitheatre to TD Echo Beach. There were noticeable and strict guidelines with obtaining tickets and passes which ensured fairness to all paying patrons.

The powerful program of performance-favourite DJs, Reggae, and Soca artists attracted over 6000+ anxious guests during the first night of this year’s OVO festival.

As per usual Carnival-fashion in the Caribbean, everyone came from all over whether it was from far, locally, or even right off the Carnival Route!

Revellers could be seen dancing to performances in their Carnival costumes and continuing the party they had begun from the night before.

To kick off this year’s OVO festival, major Reggae and Soca headliners participated in the first night of the two day festival. DJs Black Chiney from Miami and Toronto’s D’bandit, Jester, D’Enforcas etc.. started the night off by playing reggae and soca favourites for the growing crowd.

Host T-Rexxx entertained the crowd successfully from beginning to end by getting the crowd hype before and after performances and even throwing some goodies in the crowd.

Reggae artist Kranium was the first performer of the night followed by surprise guest and Trinidad and Tobago Soca favourite Kes. After Kes performed, Black Chiney warmed up the crowd for yet another surprise which was Sean Paul coming out on stage with two back up dancers who killed their dance routine.

Ebro from Apple Beats 1 who guest co-hosted the event came out on stage with T-Rexxx and waved two giant OVO flags while one of Drake’s recent hits “One Dance” played in the background before the next act came out.

Then it was time for headliner and world renown Soca artist Machel Montano from Trinidad and Tobago to do what he is known to do best – hype and entertain any audience.

Despite Reggae Dancehall favourite Beenie Man being denied entry into Canada due to contracting both the Zika and Dengue viruses, disappointment was not visible in the crowd as Machel brought out his first guest Soca artist Olatunji followed by 2016 Soca Monarch Voice and of course, Trinidadian- American Angela Hunte to perform their electric “Party Done” duet. He performed Soca anthems “Is Carnival” and “Ministry of Road” to end his set and patrons started to prepare to leave until he surprised them with Reggae guest Mavado which sent the whole venue into an excited roar.

OVO Fest 2016 Review by Lime.ttHe performed his songs and Machel brought Sean Paul back on stage to perform their collaborative hit “One Wine” which concluded the show along with fireworks and pyrotechnics to close out the night.

ENDING WITH A BANG

The “Carnival edition” for Day 1 of the OVO Festival proved to be a spectacular hit with guests from near and far who were in Toronto to enjoy North America’s biggest Caribbean Festival.

Live Nation and OVO provided guests with a memorable night with a venue, artists, and entertainment that could be described as one word: spectacular!

Download this Article as a PDF: Seventh Annual OVO Fest